The goal of exhibition events at the 2003 World Championships in Gainesville GA was achieved!!  Pam Boteler, Sheila Kuyper and Heather McNie attended the 2002 Sprint Canoe/Kayak World Championships in Seville, Spain, where they spent several days talking with International Canoe Federation (ICF) officials and officials representing Canoe Federations from around the world. The focus was on the recognition of women in canoe on the international schedule and adding exhibition events for women at the 2003 ICF Canoe Sprint World Championships. 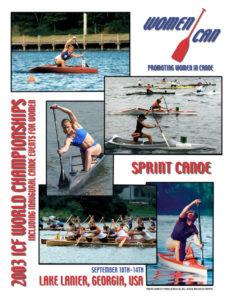 RESULTS:   USA Women in Canoe Show their Strength and Potential

These historic – first-ever – events for women in canoe were held at Lake Lanier Canoe Kayak Club in Gainesville, GA, site of the 1996 Olympics.  Eighteen women from the USA, Canada and Russia went head to head for 3 days and USA Canoe/Kayak’s (USACK) Women in Canoe did not disappoint!

All paddlers rose to the occasion – smashing U.S. National records in very exciting and competitive racing at the Lake Lanier venue.   Our events (women in canoe) were considered “exhibition” events and were not a part of the “official” schedule.   However, we had all the ingredients of a World Championship race, using the starting blocks, following the call of the official race starter, and having our official times posted.   Races were held back to back after the lunch breaks and at the end of each day.

Hannah and Erin smashed U.S. National Junior and Senior records for C2 in the 1000 (5:01.87), 500 (2:25.39) and 200 (55 sec.) meter events.  Kali Green came out of no where to compete and set a new junior record of 2:37.41 in the 500m and 5:26.53 in the 1000m events.  Hannah and Erin’s performances were particularly impressive in that they had not trained together much this year and had not planned to race until Nationals in August!    Kali also did not train exclusively in canoe this year (coming from a kayaking background).  The potential for bigger and better things is here – and taking off quickly! 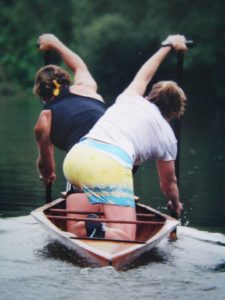 In the end, officials from the International Canoe Federation and other international governing bodies were very impressed with the display and results.   The Canadian women were truly impressive, setting world records, and were inspiring to watch.   They have had women’s-only events at their National Championships since 1995 and the strength of their local club programs shows.   The U.S. has had women-only events for only 2 years now and we made an impressive showing with a very young team.    The future is very bright for WomenCan’s Team USA!   The future is also bright for Russia – who sent 4 women to Worlds and they represented their country extremely well!  They were all 14-15 years old and, like everyone else out there on the water – they are eager to have more competition opportunities.

Just Canoe It! and WomenCan would like to take this opportunity to congratulate Team USA and especially thank Team Leader Genie Donahue for stepping in to unknown territory and helping us out.   Team USA would also like to thank Connie Hagler, the local organizing committee, all the wonderful volunteers, USACK, Canadian Canoe Association, and WomenCan (especially Heather McNie) for their continued and unwavering support and encouragement.   The local organizing committee made this dream a reality.   We had an incredible experience in Georgia – a time we will never forget.

The message was truly on the water.    Let us now look forward to a successful 2004 paddling season – here in the U.S. and abroad.  Happy Paddling!